Conomo Point - as described by Wikipedia.  Conomo is a summer community that is over 100 years old. There are 104 seasonal cottages and year-round homes on Conomo Point, a picturesque summer colony on town-leased land. In 1819, Essex separated from the town of Ipswich on the condition that Essex took care of their poor. To fulfill this agreement, the town of Essex found four properties ideal for a Poor Farm or Alms House in 1825. Since these waterfront properties were not good for shipyards, dry fishing, and farming, these properties had very little value. 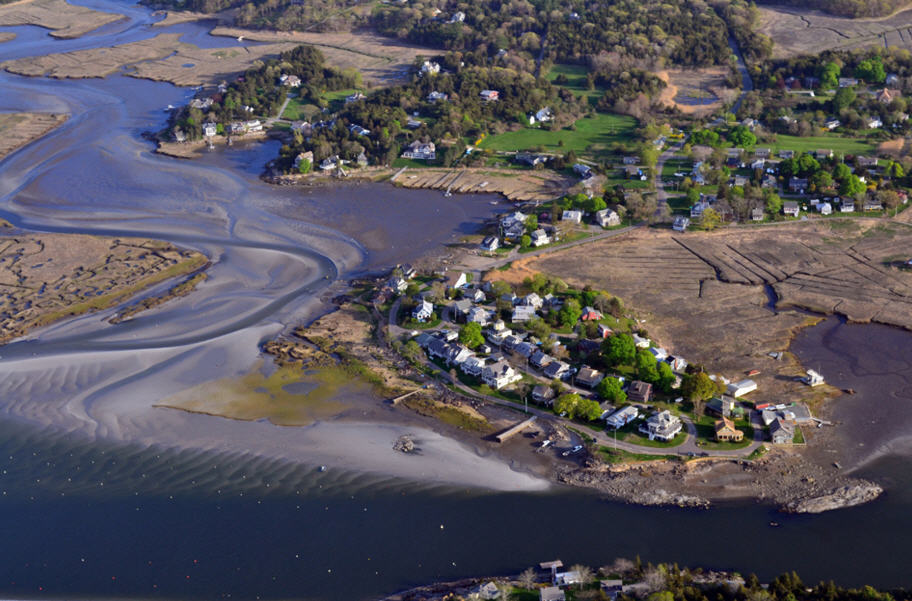 From the time from 1850 to 1900, the feelings felt toward waterfront property changed. This was due partly to the shortening of the work week and the expanding middle class. The town voted to allow "leasing of rights to build shanties on Town Farm Road. Then another group of shanties were established on Robbin's Island. Conomo Point was no longer populated by only by Essex citizens by 1900.Due to the construction of the railroad in Essex in 1892, Conomo Point was far more accessible to people from close towns.

Since the beginning, Conomo Point residents paid real estate taxes on the land they rented as well as personal taxes on their cottages. The town of Essex expected to profit from its land. The rents increased by 25% in 1927 by vote in a town meeting. In 1951, rents were increased another 5%. Then in 1961, rents were raised even higher by 25%.

From 1950 to 1970, the town of Essex sought to maximize its rental income while at the same time avoided increasing rental rates. Because of this there was a rapid growth of the Point. Over these years, the town of Essex approved new lots to be leased for the sake of cottage construction.

Since the water supplied to Conomo Point from Essex was rusty due to rusty pipe lines, Conomo residents drilled personal wells. Since year-round living never came up before because the water lines were turned off in October, Conomo Commissioners were nervous with these new well constructions. Therefore, they were cautious in granting permission to Conomo residents to drilling wells. Conomo Point Commissioners knew that if the residents of Conomo Point had fresh water year-round then the issue of year-round living would come up. In response the Board of Health stated that no wells could be made on town-owned land.